Art at the Parc

Both inside the hotel and the surrounding buildings you will find historic and modern art treasures. This inspired to add an art program with various art exhibitions. As of March 2020, every 6-8 weeks we exhibite some selected collections of various artists. The name of this programme is ‘Art at the Parc’.

Mart Visser
Mart Visser, as a renowned couturier and fashion designer, needs no introduction. What is less known is the fact that he is also an artist. He is particularly touched by the expression of the face. The portraits of impressive heads, heads and facial expressions that Visser paints are rough and abstract in design, this in stark contrast to the delicate design of his haute couture. As in his fashion collections, midnight blue, dark orange, ochre and grayish tones dominate his portraits. 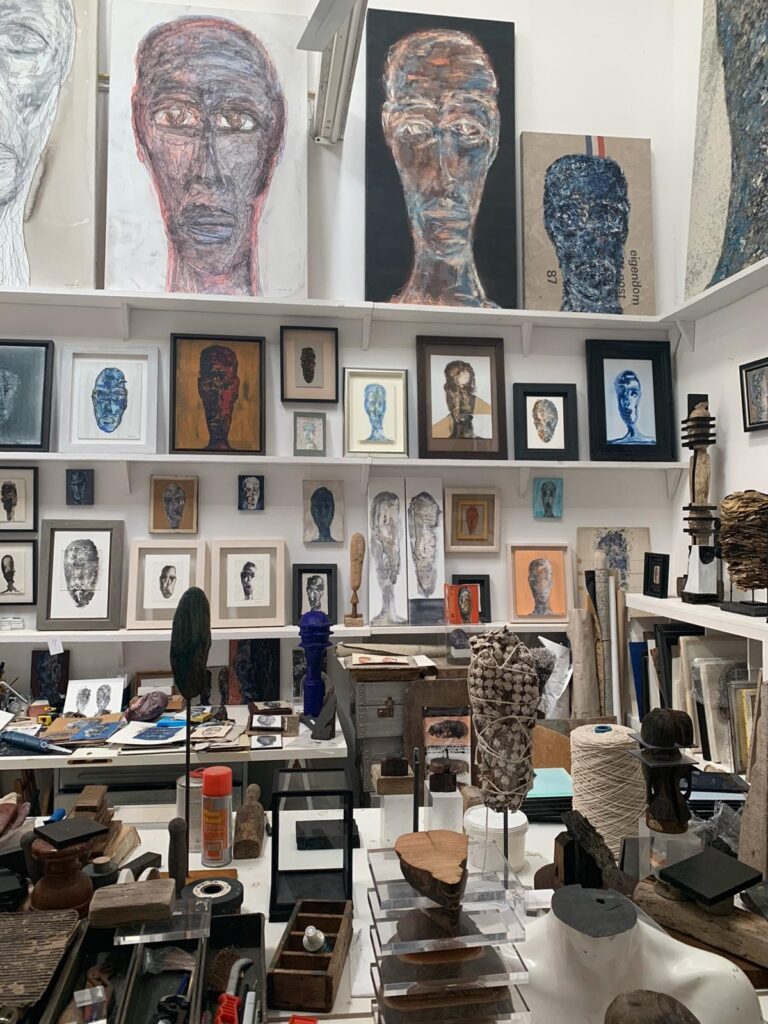 During the exhibition at Parc Broekhuizen, Visser presents new, unique work that has never been shown before. In the spring of 2022, there will be a retrospective exhibition of Mart Visser’s work from the past five years at Museum Voorlinden.
More about Mart Visser Art

Iris Le Rütte is a visual artist and poet. Her work is seen as semi-realistic and fairy-like. With Henk Visch, Tom Claassen and others, she belongs to the artists of the new figuration: the narrative and the symbol in the visual arts. Le Rütte designed many monumental sculptures for public spaces in the Netherlands and abroad, and received various cultural awards, such as the Heldring Prize from NRC Handelsblad and the IJ Prize from PwC and the municipality of Amsterdam. Her work is in the collection of companies, including Ahold and Akzo Nobel. Her book ‘Ik dicht je bij me’, with her own poems and drawings, reached its seventh edition in a short time. She had solo exhibitions in museums, such as Beelden aan Zee and Singer Laren. Her sculpture series on the roof of the OLVG hospital in Amsterdam was nominated for the Elisabeth van Thüringen Prize.

Paulien Huizinga (born Deventer, 1971) started her career as television repoter but found her true passion in photography, Wat started out as a hobby, turned into a discovery during her pre-studies at the Photo Academy. Photographing really moved her and she knew she was on the right path. A lot of practise and making mistakes, standing up again and trying over and over again.

Because, she had a dream!

Years later, she ownes her own studio in Blaricum and exhibits her work worldwide, both Paris, Milan and L.A. Paulien’s work mostly characterizes itself by strong women showing their vulnerabilty. Sensuality, sexuality, shapes and curves, you will disover them all in her creations, but above all, she feels the need to share her journey in search for the Aphrodite in every woman she has in front of her camera. Aphrodite, the godess of love, beauty and sensuality, but never a victim of who she is or who ever crosses her path.